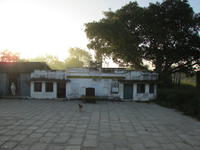 M Vijayaditya~   2202 blog posts
Entry# 475698            Tags   Past Edits
This feature shows the full history of past edits to this Blog Post.
Shakkar Nagar station has a history dating to the Nizam's Era. The Nizam Sugars Limited was constructed as the largest sugar plant in the country(said to be largest in asia before independence by locals) when The Nizam of Hyderabad was the ruler of Hyderabad state comprising of telangana in AP, parts of Karnataka and Marathwada of Maharshtra. This station is right beside the Nizam Sugars and a exclusive MG Railway line was laid to facilitate movement of sugar cane from farms to the factory when Road transport was rare and difficult in those times. After the Hyderabad state became a part of India in 1948(1 year after independence) the Factory began to encounter trouble, the railroad which was laid to transport cane from Nearby farms became history.
Today,...
more...
the Janakampet Jn-Bodhan line has a BG line with Metal sleepers and a PSR of 40KMPH, one can still find the remains of the old MG line and the Wagon Weighing platform intact till date at SKNR which is now a Halt station and MG wagons inside the factory premises waiting to be scrapped. Cant believe that the very station which now has 3 pairs of trains passing through it, once saw glorious times with steam engines passing through and full of activity.
If at all anyone happens to visit Bodhan please visit this station premises, the walls still seem to talk about their glorious past.