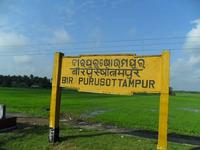 Page#    Showing 1 to 1 of 1 News Items
Jul 28 2018 (17:55) Abandoned briefcase causes panic in Odisha (www.newindianexpress.com)
IR Affairs
ECoR/East Coast
0 Followers
10208 views
News Entry# 348101  Blog Entry# 3666693      Past Edits
Jul 28 2018 (17:56)
Station Tag: Bir Purushottampur/BRST added by a2z~/1674352
Stations:  Bir Purushottampur/BRST
Posted by: A2Z~ 12817 news posts
BHUBANESWAR/PURI : An abandoned briefcase containing wires, spotted by locals near Bira Purusottampur railway station in Puri district on Friday, led to panic in the area. Suspecting that the briefcase contained explosives, the locals informed the Government Railway Police (GRP) and Railway Protection Force (RPF) who rushed to the spot and seized it.
As many as five trains were stopped by the railway authorities as a preventive measure. GRP officer said after thorough examination of the briefcase, no explosives were found in it. ADG, Railways, Pranabindu Acharya told Express that the briefcase was examined in detail and no explosives were found in it.
Page#    Showing 1 to 1 of 1 News Items
Scroll to Top
Scroll to Bottom
Go to Mobile site
Important Note: This website NEVER solicits for Money or Donations. Please beware of anyone requesting/demanding money on behalf of IRI. Thanks.
Disclaimer: This website has NO affiliation with the Government-run site of Indian Railways. This site does NOT claim 100% accuracy of fast-changing Rail Information. YOU are responsible for independently confirming the validity of information through other sources.
India Rail Info Privacy Policy