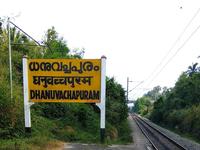 Nov 03 2013 (4:27AM)
Station Tag: Dhanuvachapuram/DAVM added by moderator**/12
Trains:  Punalur - Madurai Express/16730
Stations:  Dhanuvachapuram/DAVM
Posted by: Mohd 401 news posts
An inquiry by the Thiruvananthapuram Railway division has found that it was an error by the loco pilot that led to the incident in which the Kollam-Madurai passenger skipped Dhanuvachapuram station. The train had to travel in the reverse direction for about four kilometers from Parusivackal to allow passengers to alight at Dhanuvachapuram station later.
The incident occurred at around 10 p.m. on Friday.
Sources said that Dhanuvachapuram was a halt which did not have a ticket issuing facility; as a result the station did not have proper signals or platform facility. The...
more...
loco pilot seemed to be unaware that there was a stop at the station. It was after some passengers who were to get down at the station started complaining, that the guard of the train pulled the chain. Following this, the loco pilot stopped the train and guided it back to the station in the reverse direction.
Page#    Showing 1 to 1 of 1 News Items
Scroll to Top
Scroll to Bottom
Go to Mobile site
Important Note: This website NEVER solicits for Money or Donations. Please beware of anyone requesting/demanding money on behalf of IRI. Thanks.
Disclaimer: This website has NO affiliation with the Government-run site of Indian Railways. This site does NOT claim 100% accuracy of fast-changing Rail Information. YOU are responsible for independently confirming the validity of information through other sources.
India Rail Info Privacy Policy