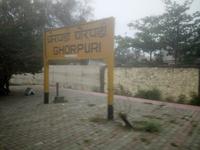 Nov 08 2013 (8:01PM)
Station Tag: Pune Junction/PUNE added by moderator**/12
Stations:  Ghorpuri/GPR   Pune Junction/PUNE
Posted by: Rang De Basanti^ 138837 news posts
PUNE: The railway administration plans to step up patrolling and inspect vulnerable spots along railway tracks in Pune division to curb incidents of stone-throwing, after a locomotive driver was injured by a stone thrown towards the Ajmer express near Ghorpadi on October 25.
The locomotive driver, Prashant Sonawane, sustained serious injuries to his right eye after being hit by a stone thrown towards the train near Ghorpadi. Sonawane's condition is improving and he is out of danger, but has to undergo medical examination at the railway hospital in Mumbai.
Railway officials here said...
more...
on Thursday that they would seek assistance from local police to curb such incidents.
"Even though the administration registers a couple of such episodes in a year, they can result in serious injuries. In Pune, areas like Ghorpadi and Dapodi are vulnerable and chances of stones being thrown at trains are more if a slum area is located near the tracks," public relations officer of Pune railway division Y K Singh said.
In the meantime, officials said the number of stone-throwing cases could be higher as not all incidents are reported.
"Many times, stones may not have been hurled at trains with the intention of injuring anyone. Those involved consider it a means of entertainment, but people must understand that such incidents can cause injuries and need to be stopped," a railway official said.
The official said the administration would speak to the railway protection force and the government railway police to prepare an action plan to increase vigil at vulnerable spots.
An official from GRP said they would inspect the spot where the driver was injured.
Page#    Showing 1 to 3 of 3 News Items
Scroll to Top
Scroll to Bottom
Go to Mobile site
Important Note: This website NEVER solicits for Money or Donations. Please beware of anyone requesting/demanding money on behalf of IRI. Thanks.
Disclaimer: This website has NO affiliation with the Government-run site of Indian Railways. This site does NOT claim 100% accuracy of fast-changing Rail Information. YOU are responsible for independently confirming the validity of information through other sources.
India Rail Info Privacy Policy