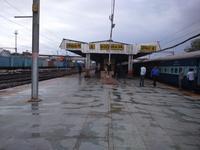 Almost 19 years after a mob torched a coach of Sabarmati Express at Godhra station in Panchmahal district of Gujarat, leading to the death 59 “karsevaks”, key accused Rafiq Hussain Bhatuk has been nabbed from Godhra town, police said on Monday.
Bhatuk (51) was part of the “core group” of the accused persons involved in the entire conspiracy. He has been on the run for the past 19 years, said Panchmahal Superintendent of Police Leena Patil.
Based on a specific tip-off, a team of Godhra police raided a house in Signal Falia...
more...
area located near the railway station on Sunday night and picked up Bhatuk, Patil told PTI.
“Bhatuk was part of the core group of the accused who had hatched the entire conspiracy, incited the mob and even arranged petrol to torch the train compartment. He fled to Delhi immediately after his name cropped up during investigation. He was facing murder and rioting charges among others,” Patil said.
A total of 59 “karsevaks” were killed in the Godhra train burning incident on February 27, 2002, triggering the worst communal riots in the history of Gujarat. The SP said Bhatuk used to work as a labourer at Godhra railway station.
“He was involved in pelting stones on the compartment and pouring petrol inside before it was set on fire by other accused,” she added.An FIR on torching of the coach allegedly by a mob from Signal Falia area located near the railway station had been registered with the Godhra Railway Police, said Patil.
“After fleeing Godhra following the incident, Bhatuk spent most of his time in Delhi where he worked on railway stations and also at construction sites as a labourer. He also sold household items on a handcart,” the SP said.
As part of his strategy to evade arrest, Bhatuk shifted his family from Sultan Falia, where he used to live before the Godhra incident, to Signal Falia recently, said Patil.
“We recently learnt that he had changed his house and visited his family in the past too. However, we couldn’t catch him as he used to leave after a day or two. This time, our teams managed to catch him. We will hand him over to Godhra railway police for further investigation,” said Patil.
She said at least three accused — Salim Ibrahim Badam aka Salim Panwala, Shaukat Charkha and Abdulmajid Yousuf Mitha — still remain at large in this case. It is believed that the trio had fled to Pakistan, she added.
Feb 03 (23:23) Railways awards compensation to 23 victims of 2002 Sabarmati Express train carnage case (www.deccanherald.com)
Commentary/Human Interest
WR/Western
0 Followers
5233 views
News Entry# 436836  Blog Entry# 4866101      Past Edits
Feb 03 2021 (23:23)
Station Tag: Godhra Junction/GDA added by Anupam Enosh Sarkar/401739
Stations:  Godhra Junction/GDA
Posted by: Anupam Enosh Sarkar^~ 27778 news posts

The family members of 23 victims, out of 59, who were killed in the Sabarmati Express train carnage case in 2002, were given cheques of Rs 4.85 lakh each by the Indian Railways as compensation as ordered by Gujarat High Court back in 2017.
In 2017, a division bench of high court while pronouncing judgement on a batch of appeal petitions in the case had directed the state and the railways to pay Rs 10 lakh as compensation to each family members of 59 kar sevaks who were killed in the incident on February 27, 2002. They were traveling in the S-6 coach of Sabarmati Express from Ayodhya which was burnt at Godhra railway station. The incident had triggered widespread communal riots....
more...
"A total of 23 victims' families were given cheques of Rs 4.85 lakh. The others will be awarded once the documenting process gets over. Although it is too late, it has come as a huge relief to all of us," said Bipin Thakkar who lost his brother-in-law and father-in-law in the incident. He said that state government has already distributed the amount of Rs5 lakh as ordered by the court while the railway is yet to comply with the order. He said that since railways had awarded Rs15,000 to the victims two days after the incident, they are paying the remaining Rs4.85 lakh to everyone.
The division bench had ordered back in 2017, "the amount of compensation to be awarded to each of the victim for loss of life shall be Rs.10 lakhs will be just and fair to be shared equally by the State of Gujarat and the Ministry of Railways, Union of India. In case, any ex gratia payment is made to the victim either by the State of Gujarat or Ministry of Railways, or under any scheme of the Central Government, such amount is to be excluded against this amount."
In the same order, the court had commuted the death sentence of 11 convicts to rigorous life imprisonment while upholding the sentencing of 20 others to life term. It also upheld acquittal of 63 remaining accused.
Feb 02 (08:35) रेलवे:गोधरा-नागदा सेक्शन को 160 किमी प्रति घंटे के लिए तैयार कर रहे (www.bhaskar.com)
Commentary/Human Interest
WR/Western
0 Followers
7593 views
News Entry# 436468  Blog Entry# 4864162      Past Edits
Feb 02 2021 (08:36)
Station Tag: Nagda Junction/NAD added by Anupam Enosh Sarkar/401739