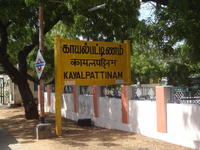 Page#    Showing 1 to 1 of 1 News Items
Jan 12 2014 (09:49) Railway station lacks facilities (www.thehindu.com)
Commentary/Human Interest
SR/Southern
News Entry# 163856      Past Edits
Jan 12 2014 (9:49AM)
Station Tag: Kayalpattinam/KZY added by rdb**/69261
Stations:  Kayalpattinam/KZY
Posted by: Rang De Basanti^ 138837 news posts
Lack of facilities greets passengers at Kayalpatnam. With the absence of an extended platform, shelter, lights and shortage of drinking water, they are facing severe hardships, according to S.K. Salih of Sithan Street, Kayalpatnam.To add to their woes, the platform was low and many passengers found it very tough to board trains at this station, he said here on Wednesday.Despite representations to railway authorities, no effort has been made till now to develop basic infrastructure at Kayalpatnam station.To seek officials’ attention for the development of this station, he said the Indian Union Muslim League along with various political parties and organisations would stage a rail roko at Kayalpatnam on February 18.A.R. Badul Ashab of Solukkar Street said many passengers, especially the elderly, who frequent Chennai by the Chendur express, had been forced to move to Tiruchendur station to board the train.Since the Chendur express train was being scheduled to stop just...
more...
for sixty seconds at Kayalpatnam, the passengers preferred to board at Tiruchendur, the venue of departure. Besides, Tirunelveli-Tiruchendur passenger train was also plying between these two destinations via Arumuganeri, Kurumbur, Nazareth, Srivaikuntam, Thathankulam, Seidunganallur and Palayamkottai daily, he said.Additional Divisional Railway Manager V. Ajith Kumar, when contacted, said works to raise and extend the platform and other facilities had been sanctioned and based on funds availability, the works would be taken up.
Page#    Showing 1 to 1 of 1 News Items
Scroll to Top
Scroll to Bottom
Go to Mobile site
Important Note: This website NEVER solicits for Money or Donations. Please beware of anyone requesting/demanding money on behalf of IRI. Thanks.
Disclaimer: This website has NO affiliation with the Government-run site of Indian Railways. This site does NOT claim 100% accuracy of fast-changing Rail Information. YOU are responsible for independently confirming the validity of information through other sources.
India Rail Info Privacy Policy