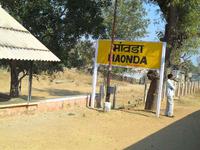 Page#    Showing 1 to 1 of 1 News Items
Dec 04 2014 (01:27) Bomb threat at Goa's Margao railway station (www.business-standard.com)
Crime/Accidents
SWR/South Western
News Entry# 203539      Past Edits
Dec 04 2014 (1:27AM)
Station Tag: Madgaon Junction/MAO added by arjuntemp/741425
Stations:  Madgaon Junction/MAO   Maonda/MADA
Posted by: arjuntemp 38 news posts
All trains passing through Goa's busiest railway station in Margao were Wednesday halted and scanned for explosives, after a note with a warning about a series of blasts was received by the station master.
Police sources said the note signed off as "Sevak" warned that "several trains passing through the Margao railway station would be targetted".
The note also said railway authorities should not treat it as a hoax.
Baban...
more...
Ghadge, public relations officer of the Konkan Railway Corporation, which manages the Margao railway station, confirmed the threat.
"We have been checking trains from the morning. And the compartment checking procedure would be in place throughout the day," he said.
Police sources said two bomb squads were posted at the railway station and sniffer dogs were also deployed for the search operation.
"We are examining every compartment of each train passing through the station. The operation will continue till tomorrow (Thursday). We are not taking any chances," a police official said.
Page#    Showing 1 to 1 of 1 News Items
Scroll to Top
Scroll to Bottom
Go to Mobile site
Important Note: This website NEVER solicits for Money or Donations. Please beware of anyone requesting/demanding money on behalf of IRI. Thanks.
Disclaimer: This website has NO affiliation with the Government-run site of Indian Railways. This site does NOT claim 100% accuracy of fast-changing Rail Information. YOU are responsible for independently confirming the validity of information through other sources.
India Rail Info Privacy Policy