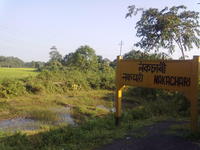 Jan 01 2014 (12:45PM)
Train Tag: Dibrugarh- Kolkata Express/12526 added by rdb**/69261
Trains:  Dibrugarh - Kolkata Weekly SF Express/12526
Stations:  Nakachari/NCH
Posted by: Rang De Basanti^ 138863 news posts
JORHAT/ GUWAHATI: A railway staff was killed and three others sustained serious injuries when the Dibrugarh-Kolkata (Down) Express ran over them at Nakachari in Mariani area of Jorhat district, some 350 km from Guwahati, on Tuesday afternoon.The train killed Girgit Majhi who was working at the track with his colleagues. Majhi, who hails from Bihar, was appointed as a railway pointsman. The injured workers were rushed to Jorhat Medical College Hospital (JMCH), around 35 km from the spot.OC, Government Railway Police , Mariani, Sarat Kathar said the incident occurred at around 2 pm near the Nakachari railway station. Doctors attending to the injured railway workers said their condition is critical."The train crushed the people at work near the station. All of them are posted at Mariani junction and reside at the railway colony there," Kathar said.
Eyewitnesses...
more...
said the incident took place due to the negligence of the railway officials. "The incident could have been averted if the signal was given properly," said a worker. An official of the North East Frontier Railway at Guwahati said,"After the probe is over, we will take proper action. According to railway norms, the victim's family will receive due compensation as he died on duty," said a railway official.
Page#    Showing 1 to 1 of 1 News Items
Scroll to Top
Scroll to Bottom
Go to Mobile site
Important Note: This website NEVER solicits for Money or Donations. Please beware of anyone requesting/demanding money on behalf of IRI. Thanks.
Disclaimer: This website has NO affiliation with the Government-run site of Indian Railways. This site does NOT claim 100% accuracy of fast-changing Rail Information. YOU are responsible for independently confirming the validity of information through other sources.
India Rail Info Privacy Policy