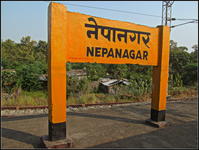 A woman, and her two-month old child, had a miraculous escape after she lay down between the tracks, allegedly to commit suicide, and a train passed over them without causing any injuries to the two. The incident occurred on Saturday at Nepanagar railway station, part of Central Railway’s Bhusawal division, and located in MP’s Burhanpur district.
“A woman identified as Tabassum, travelling in Kashi Express from Allahabad to Mumbai, got off the train and lay between the tracks, along with her two-month-old child, when the Pushpak Express was approaching,” said Khandwa Railway Protection Force (RPF) post in charge S K Gurjar.
“Eyewitnesses...
more...
have told us that the train passed over them without causing any injury to the two. People present there raised an alarm and took her to hospital,” Gurjar said.
She has told RPF officials, who questioned her later, that she tried to commit suicide due to personal problems, Gurjar said. “She was on her way to her maternal grandmother’s home in Mumbai. She has said that her stepmother got her married to a man called Sajid. The man allegedly divorced her when she got pregnant,” Gurjar said.
The woman was kept at the state Women and Child Department’s Sakhi centre and some relatives came from Mumbai in the afternoon today to take her along with them, Gurjar informed.
Page#    Showing 1 to 3 of 3 News Items
Scroll to Top
Scroll to Bottom
Go to Mobile site
Important Note: This website NEVER solicits for Money or Donations. Please beware of anyone requesting/demanding money on behalf of IRI. Thanks.
Disclaimer: This website has NO affiliation with the Government-run site of Indian Railways. This site does NOT claim 100% accuracy of fast-changing Rail Information. YOU are responsible for independently confirming the validity of information through other sources.
India Rail Info Privacy Policy