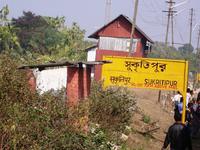 Jan 23 2015 (12:43AM)
Station Tag: Lumding Junction/LMG added by Vaibhav Agarwal*^/432532
Stations:  Sukritipur/SQF   Silchar/SCL   Lumding Junction/LMG
Posted by: Vaibhav Agarwal 1405 news posts
GUWAHATI, Jan 22 – As the final touch to a newly-constructed railway line, the NF Railway has introduced a track packing machine under the Lumding-Silchar gauge conversion project, a press release received here stated.
The track machine, which measures 65 foot long and weighs 55 MT, was taken to Silchar by road from Guwahati. The machine was carried by a special trailer with 72 wheels. It was unloaded at Sukritipur with the help of four road cranes. It started working at the Silchar yard from January 19.
As part of the ‘mega block’...
more...
works under the Lumding-Silchar gauge conversion project, which started from October 1, 2014, the track linking work from Km 120 between Harangajao and Ditokcherra to Km 201 at Silchar via Badarpur has already been completed. During this period, a major bridge (No. 510) with a 30-metre span through girder has also been completed between Bandarkhal and Damcherra.
Altogether 49 ballast rakes have been unloaded at Km 98/2 near Migrendisa up to January 19, the release added.
Page#    Showing 1 to 1 of 1 News Items
Scroll to Top
Scroll to Bottom
Go to Mobile site
Important Note: This website NEVER solicits for Money or Donations. Please beware of anyone requesting/demanding money on behalf of IRI. Thanks.
Disclaimer: This website has NO affiliation with the Government-run site of Indian Railways. This site does NOT claim 100% accuracy of fast-changing Rail Information. YOU are responsible for independently confirming the validity of information through other sources.
India Rail Info Privacy Policy