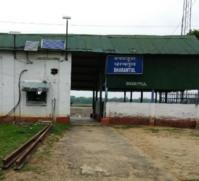 Page#    Showing 1 to 6 of 6 News Items
Oct 21 2013 (06:41) Indian Railways Likely to Stop Pantry Cars in Trains; Buy Food at Station (www.microfinancemonitor.com)
Commentary/Human Interest
News Entry# 153270      Past Edits
Oct 21 2013 (7:36AM)
Station Tag: Dharamtul/DML added by moderator**/12
Stations:  Dharamtul/DML
Posted by: Rang De Basanti^ 138863 news posts
Indian Railways is likely to end the system of supplying food in express trains but provide food at stations through fast-food outlets from 2014 onwards, owing to increase in the number of fire incidents in trains, with the latest one reported on October 15 in a Delhi-bound Rajdhani Express in Assam.Often fire accidents in running trains owing to pantry cars in long-journey trains, Indian Railways has decided more than a year ago not to call for tenders for pantry car-based food supplies in trains and no tenders were called this year though the contract ends by the end of this year in all trains.In fact, smoking was effectively banned on trains ten years ago and the only reason cited for these accidents is the use of LPG gas in pantry cars.The recent trigger was when a fire broke out in a pantry car of the New Delhi-bound Rajdhani Express on October...
more...
14. Last year, two incidents of fire were reported. The increase in the incidents owing to fire breaking out from the pantry car, has triggered the Railway Ministry to heed the suggestion to stop pantry cars in these trains.
Here is a timeline of fire accidents in Indian railways in the last 20 years, with the recent one first.
14 October, 2013 – The recent incident happened on October 14 when a major fire broke out in a pantry car of the Dibrugarh-New Delhi Rajdhani Express near Dharamtul Railway Station in Morigaon district, Assam.
30 Nov 2012 – At least two AC coaches of GT Express caught fire near Gwalior on Friday, claiming several lives.
16 October 2012 – A bogie of the Solapur-bound passenger train from Hyderabad caught fire during its halt at the station in Gulbarga. Immolation by a couple led to fire in train at Gulbarga station, says Railway police.
30 July 2012 – One of the coaches of the Chennai-bound Tamil Nadu Express (New Delhi-Chennai) caught fire early in the morning, near Nellore in Andhra Pradesh and 47 people were killed and 25 injured.
22 November 2011 – Howrah-Dehradun express train caught fire and seven were burnt to death. It was around 2.30am when coach number B1 of the Dehradun-bound train caught fire. Later, the fire spread to coach B2. Both coaches were badly burnt, but all the casualties were from B1, say reports.
12 July 2011 – New Delhi-Patna Rajdhani Express’s coach caught fire in the outskirts of New Delhi.
18 April 2011 – Three coaches of the Mumbai – Delhi Rajdhani Express caught fire near Ratlam district in Madhya Pradesh and the fire was put out quickly. No passenger was harmed.
13 February 2009 – Coromandel Expressmet caught fire soon after the train left Jajpur Road station in Orissa.
18 August 2006 – Two carriages caught fire on the Chennai–Hyderabad Express near Secundrabad station.
15 May 2003 – Fire broke out in Golden Temple Mail at 3.55 hrs between Ludhiana and Ladhowal stations, resulting in 36 deaths and 15 injuries.
14 May 1995 – Fifty-two people were killed as Madras–Kanyakumari Express met with fire accident near Salem.
26 October 1994 – Twenty seven people were killed as DN Mumbai–Hawrah mail caught fire on its S5 Sleeper class coach between Lotapahar and CKP stations (SE Railway) at 02.51 AM.
16 April 1990 – 70 people were killed as shuttle train near Patna caught fire.
23 February 1985 – Rajnandgaon train in Madhya Pradesh caught fire and 50 people were killed.
Oct 15 2013 (22:27) Pantry car of Rajdhani Express catches fire; none injured (economictimes.indiatimes.com)
Major Accidents/Disruptions
NFR/Northeast Frontier
News Entry# 152707      Past Edits
Oct 15 2013 (10:36PM)
Station Tag: Dharamtul/DML added by moderator**/12
Stations:  Dharamtul/DML
Posted by: Rang De Basanti^ 138863 news posts

MORIGAON: A major fire broke out in a pantry car of the Dibrugarh-New Delhi Rajdhani Express near Dharamtul Railway Station in Morigaon district early today.No one was injured in the fire, although 15 workers in the pantry car jumped to safety when the train stopped immediately after the incident, Northeast Frontier Railway Spokesman Subroto Lahiri said.The fire broke out at around 4.30 AM in the pantry car and soon engulfed the whole bogie. Fire tenders and local people fought for two hours to douse the flames before the train was brought to Dharamtul station.After the burnt pantry car was detached, the train made its onward journey to New Delhi from Guwahati around noon, Lahiri said.The cause of the fire was yet to be ascertained. Trains on the single line Guwahati-Lumding railway track were stopped for three hours till it was cleared at 8 AM.
The...
more...
train originated from Dibrugarh on 8.30 PM last night and was scheduled to arrive at Guwahati at 6.40 AM.
Oct 15 2013 (14:41) Fire in Rajdhani Express, no casualty reported (www.deccanherald.com)
Major Accidents/Disruptions
News Entry# 152669      Past Edits
Oct 15 2013 (6:47PM)
Station Tag: Dharamtul/DML added by moderator**/12

Oct 15 2013 (11:44AM)
Train Tag: Dibrugarh Town-NewDelhi Rajdhani Express/12423 added by moderator**/12
Station Tag: Dharamtul/DML added by moderator**/12
Trains:  Dibrugarh - New Delhi Rajdhani Express (Via Bogibeel)/20505
Stations:  Dharamtul/DML
Posted by: SUBHAMDEY 7 news posts
The pantry car of New Delhi-bound Rajdhani Express gutted in fire near Dharamtul Railway Station in Morigaon district of Assam early this morning.
No casualty has been reported so far.
The Chief Public relation Officer of North east Frontier Railway said that at around 4.30 AM, a fire broke out in the pantry car and engulfed the train. The train was then halted at Dharamtul Station. Fire tenders fought for two hours to douse the flame.
Train...
more...
servicess on the Guwahati and Lumding railway track were stopped for 3 hours. The railway track was cleared at 8 AM after the fire was completely doused.
Page#    Showing 1 to 6 of 6 News Items
Scroll to Top
Scroll to Bottom
Go to Mobile site
Important Note: This website NEVER solicits for Money or Donations. Please beware of anyone requesting/demanding money on behalf of IRI. Thanks.
Disclaimer: This website has NO affiliation with the Government-run site of Indian Railways. This site does NOT claim 100% accuracy of fast-changing Rail Information. YOU are responsible for independently confirming the validity of information through other sources.
India Rail Info Privacy Policy