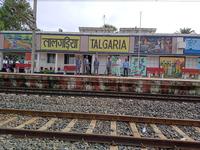 A Sati relic at Talgaria station. Pic courtesy/The Railway Magazine
There’s a story about how a hollow ditch at the small station of Talgaria (located in today’s Jharkhand) proved to be a problem for early railway engineers. The “divine hole”, as referred to in records, was once used as a sati site. Crowds of believers visited it even after a railway alignment, and when the station platform crossed over it, railway engineers retained the site. They covered it with metal plates so as not to hurt the religious sentiments of the people.
Page#    Showing 1 to 1 of 1 travel tips
Scroll to Top
Scroll to Bottom
Go to Mobile site
Important Note: This website NEVER solicits for Money or Donations. Please beware of anyone requesting/demanding money on behalf of IRI. Thanks.
Disclaimer: This website has NO affiliation with the Government-run site of Indian Railways. This site does NOT claim 100% accuracy of fast-changing Rail Information. YOU are responsible for independently confirming the validity of information through other sources.
India Rail Info Privacy Policy