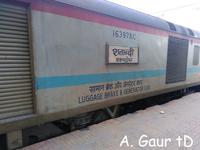 During Holi, passengers face a lot of trouble due to lack of seat availability in trains and buses. Tejas can provide relief to passengers traveling from New Delhi to Lucknow on Holi. IRCTC has prepared to install three additional coaches in Tejas Express, the Country's First Corporate Train running between New Delhi to Lucknow Jn. IRCTC officials said that this will greatly facilitate to passengers. At the same time, ticket prices in trains with dynamic ticketing system have increased significantly.
According to IRCTC officials, 2 AC Chair Car and 1 Executive AC Coach will be installed in Tejas Express from New Delhi on March 6, 7 and 8. Along with this, all the waiting tickets can be confirmed and other passengers will...
more...
also get the benefit. Similarly, passengers going from Lucknow to New Delhi after Holi are also expected to get seats in Tejas. The crowd will increase from March 11 to return from Lucknow after Holi. On March 11, there is seat available in Shatabdi and Humsafar, but the fare is quite expensive.
Roadways will run additional buses from Anand Vihar Bus Terminal and Kaushambi from 6 March to 15 March from Delhi to Lucknow for Holi. The Corporation administration has also started online booking of additional buses due to the maximum congestion on the Delhi route. Advance booking for additional buses is being done on the Roadways website at click here
Mar 02 (15:40) Day after Shatabdi crushed two: Traffic density at Gyaspura 8 times acceptable limit, no state nod for bridge, says railways (indianexpress.com)
Crime/Accidents
NR/Northern
0 Followers
2980 views
News Entry# 402253  Blog Entry# 4582160      Past Edits
Mar 02 2020 (15:40)
Station Tag: Ludhiana Junction/LDH added by 🌠HOG 93 SAMPOORNA KRANTI EXPRESS 94 HOG🌠/2046623