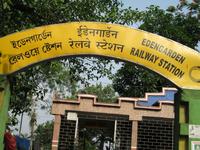 Mar 08 2014 (10:43AM)
Station Tag: Eden Gardens/EDG added by rdb**/69261
Stations:  Erode Junction/ED
Posted by: Rang De Basanti^ 138863 news posts
Little did K. Ganesan, a shunting master on the verge of retirement with the Railways here, ever imagine he would don the mantle of a chief guest for a unique event at the Erode Junction on Friday.
The honour of inaugurating a Medical Assistance Booth, established by Sudha Hospitals with a service orientation, was bestowed on Mr. Ganesan by the Divisional Railway Manager of Salem Division, Subhranshu who was initially approached by the hospital authorities to launch the medical service.
The DRM thought it fit to let Mr. Ganesan to do the honours...
more...
in recognition of his 37 years of service and conveyed his gesture formally through the Station Manager Sivanandam.
“l was wondering how an employee at my level could be considered a chief guest. Only after coming to the function spot, I am able to realise the significance of the role assigned to me. I joined the Railways in 1977 as a traffic porter. It is quite motivating,” said Mr. Ganesan trying to shake-off his sleep since he had headed to the venue after night shift duty.
Clad in a shirt and dhoti, Mr. Ganesan who will be retiring from service this month-end inaugurated the medical assistance booth in the presence of D. Kandasamy, Chairman, Sudha Institute of Medical Sciences; his son and Managing Director K. Sudhakar; C. S. Gowthaman, Member, Zonal Railway Users Consultative Committee, and Balasubramanian, Member, Divisional Railway Users’ Consultative Committee.
The hospital authorities invited a staff member to light the traditional lamp at the booth. The medical booth would have a doctor, a nurse and a driver for an ambulance parked nearby, Dr. Kandasamy said.
Those requiring specialised treatment could be transported to the hospital, located less than two km away, Dr. Kandasamy said.
Page#    Showing 1 to 1 of 1 News Items
Scroll to Top
Scroll to Bottom
Go to Mobile site
Important Note: This website NEVER solicits for Money or Donations. Please beware of anyone requesting/demanding money on behalf of IRI. Thanks.
Disclaimer: This website has NO affiliation with the Government-run site of Indian Railways. This site does NOT claim 100% accuracy of fast-changing Rail Information. YOU are responsible for independently confirming the validity of information through other sources.
India Rail Info Privacy Policy