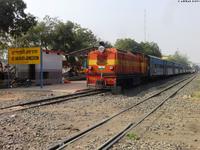 Nov 25 2019 (06:11)
Train Tag: Nagbhir - Itwari NG Passenger/58844 added by 12649⭐️ KSK ⭐️12650^~/1203948
Trains:  Nagbhir - Itwari NG Passenger/58848   Itwari - Nagbhir NG Passenger/58847   Itwari - Nagbhir NG Passenger/58845   Nagbhir - Itwari NG Passenger/58846   Nagbhir - Itwari NG Passenger/58844
Stations:  Itwari NG/ITRN   Nagbhir NG/NABN
Posted by: Yash M~ 4129 news posts
Nagpur: The South East Central Railway (SECR) and many passengers bid adieu to the last operating narrow gauge train between Itwari-Nagbhid after 111-year-long service on the 111-km section.The last train was flagged off by a helper Virendra Kohle in the presence of SECR divisional railway manager (DRM) Shobhana Bandopadhaya, ADRM YH Rathod, ADRM BK Rath and others on Sunday evening.During the day, apart from regular travellers, the four trains that leave for Nagbhid from Itwari saw inquisitive visitors, who just travelled to make the trip a memorable one. Many of them took selfies with the train and its staff.Going down the memory lane, S Karunakar Rao (52), who was waiting to travel to Nagbhid with his friends, said, “As a youngster, I used to come with my mother Jayalaxmi, who was teacher in a railway school at Itwari station in the ’80s. The train was a fascination for us.”“When I read...
more...
in TOI about the train’s permanent closure from November 24, I made it a point to be part of the historic moment. Like us, there were several passengers who boarded the train from stations like Kuhi and Umred,” said Rao.Architect Asad Firdosy was too excited to travel in the train with his family. “We have bought ticket for Nagbhid but may alight in between depending on the mood of other members,” he said.Many like Shankar Nimje (51), a farm labourer from Nagbhid, said, “The train was good for those who had time and less money. Now, we will have to visit the city by ST or private transport.”Work on the 116km broad gauge line will start on December 1 by MRIDCL. Its foundation stone was laid by the highways minister Nitin Gadkari in March. Once upgraded, travel time to Nagbhid will be cut to 2.5 hours instead of 5 hours at present.Many vendors will be affected. Many small-time farmers like Subramani Gedam and Ravin Bankar used to bring their produce to Itwari market via the train.“We used to arrive by morning train and leave by evening after selling all the produce. The upgradation work should be completed in time as promised,” said Bankar.Officials said vintage material and coaches will be conserved in the museum while rakes will be disposed of or condoned depending on its codal life.
Nov 12 2019 (14:40) Nagpur-Nagbhid rail route to be closed from Nov 25 (timesofindia.indiatimes.com)
IR Affairs
SECR/South East Central
0 Followers
47352 views
Great: 2
Useful: 5
★
News Entry# 394769  Blog Entry# 4486216      Past Edits
Nov 12 2019 (14:40)
Station Tag: Nagpur Junction/NGP added by 12649⭐️ KSK ⭐️12650^~/1203948

Nov 12 2019 (14:40)
Train Tag: Itwari - Nagbhir NG Passenger/58843 added by 12649⭐️ KSK ⭐️12650^~/1203948
Trains:  Nagbhir - Itwari NG Passenger/58848   Itwari - Nagbhir NG Passenger/58843   Itwari - Nagbhir NG Passenger/58847   Itwari - Nagbhir NG Passenger/58845   Nagbhir - Itwari NG Passenger/58846   Nagbhir - Itwari NG Passenger/58844
Stations:  Nagpur Junction/NGP   Nagbhir Junction/NAB   Itwari Junction (Nagpur)/ITR   Itwari NG/ITRN   Nagbhir NG/NABN
Posted by: Yash M~ 4129 news posts
Nagpur: With the South East Central Railway (SECR) closing the 116km Nagpur-Nagbhid narrow gauge route, decks have been cleared for its conversion into broad gauge. The project was announced in 2013-14.“The much-awaited work on gauge conversion will start in December,” said Rajesh Kumar Jaiswal, managing director of Maharashtra Railway Infrastructure Development Corporation (MRIDC), the executing agency.Of the over 650km narrow gauge network under the Nagpur division of SECR, the 116km Nagpur-Nagbhid was the only last stretch remaining to be upgraded.SECR officials said with MRIDC launching work in December, the entire section will be closed for traffic from November 25. Currently, a pair of four narrow gauge trains operate in this sector with packed capacity. Jaiswal said the broad gauge work is targeted to be completed in 21 months when it will be thrown open for traffic with better facilities.The Rs 1,400 crore Nagpur-Nagbhid broad gauge project is a joint venture between...
more...
Indian Railways and Maharashtra government in which the railways and state will share Rs 280 crore each while Rs 840 crore is a loan. When the project was announced, its cost was Rs 400 crore.Jaiswal said, “All the clearances have been taken and designs are ready. We also plan to connect the line to coal mines in Umred. The line will be an alternative to passenger trains as well as direct link to north and southbound freight trains.”The broad gauge project is basically to ease transportation of coal to power plants in the region. After completion, it is expected to save Rs 152 crore of Mahagenco annually due to reduction in transport distance of coal to the company’s power plants in Koradi and Khaparkheda from mines in Chandrapur district.“Now, we will have to pay through the nose to private bus operators. MSRTC fares too have increased,” said Haribhau Bagde, a resident of Bhiwapur.
Rail News
41387 views
Agree: 2
Nov 12 2019 (17:27)
Manchester Got CanceIIed
Amar_Pal_30~   1255 blog posts
Re# 4486216-1            Tags
No Tags
Past Edits
This feature shows the full history of past edits to this Blog Post.
@4486216-0  @Yash M~
So NGP-NAB-G BG will come in to operational effect from 2021-22 I hope.
It will ease load on NGP-G Main line also
Aug 18 2019 (10:56) Last narrow gauge line in Central India to chug into history (www.outlookindia.com)
IR Affairs
CR/Central
0 Followers
34059 views
Great: 1
News Entry# 388938  Blog Entry# 4404208      Past Edits
Aug 18 2019 (10:56)
Station Tag: Nagbhir NG/NABN added by 12649⭐️ KSK ⭐️12650^~/1203948

Aug 18 2019 (10:56)
Train Tag: Itwari - Nagbhir NG Passenger/58843 added by 12649⭐️ KSK ⭐️12650^~/1203948
Trains:  Itwari - Nagbhir NG Passenger/58843
Stations:  Itwari NG/ITRN   Nagbhir NG/NABN
Posted by: Yash M~ 4129 news posts
The old world magic and excitement of travelling leisurely by trains on narrow gauge railway lines, is fast becoming a thing of the past world over, including India. Now, the last surviving narrow gauge line, running 106 km between Itwari-Nagbhid near Nagpur on the South East Central Railway (SECR), will also become a part of world rail history, within a year or so. Probably, Bollywood contributed a lot to popularise the romance of the narrow gauge trains, featuring them in several memorable film songs. Some of the classic numbers people still remember are: "Jiya O, Jiya Kucch Bol Do" ("Jab Pyar Kisi Se Hota Hai", 1961, Shimla-Kalka Railway), "Mere Sapnon Ki Rani" ("Aradhana", 1969, Darjeeling Mountain Railway), "Gadi Bula Rahi Hai" ("Dost", 1974), "Chhaiyya, Chhaiyya" ("Dil Se", 1998, Nilgiri Mountain Railways), among many others. Nagpur to Nagbhid, which was the original route of the narrow gauge railway line, essentially served as...
more...
the lifeline of the people in the erstwhile Central Province of British India. The line itself was born out of an emergency during the Great Indian Famine of 1876-1878, when the Bengal-Nagpur Railway announced its construction, later known as Satpura Railway network, to save the lives of people dying of hunger in the remote and inaccessible parts of central India. The 4 hour 45 minute long Itwari-Nagbhid train journey remains thrilling as the trains chug through dense forests, tribal hamlets, mountains with an occasional tunnel, plains and river bridges; in the olden days hauled by steam engines, and later by diesel engines, connecting Nagpur and Chandrapur districts in eastern Maharashtra. Now, this last remaining section (Itwari-Nagbhid narrow line gauge of 2.5 feet or 76.2 cms) is currently being converted to broad gauge jointly by the Indian Railways and the Maharashtra Rail Infrastructure Development Corporation Ltd (MRIDC), Mumbai. "This project will cost around Rs 1,400 crore with the Indian Railways and MRIDC - the executing authority - sharing the amount equally (50 per cent each)," a SECR spokesperson told . Presently, there are 15 major stations en route including Itwari, Bhandwadi, Umred, Bhiwapur, Kanatempa, Bamhani, Mangli, and Kuhi. Local villagers and farmers commuting for employment or trade to Nagpur had to take the road route which was more expensive and time-consuming in the absence of poor rail connectivity. The conversion proposal was first announced in 2014 at a cost of Rs 350 crore, which has now increased to Rs 1,400 crore owing to various delays and the Centre''s decision to combine it with the electrification project of this route. Other erstwhile narrow gauge lines in the region included Nagpur-Chhindwara, Chhindwara-Nainpur, Nainpur-Mandla Fort and Balaghat-Nainpur-Jabalpur sections which ended between October-November 2015. A total of 53 trains were operated on the narrow gauge lines which have now been either converted or nearing completion of conversion into broad gauge with high-speed express trains ferrying thousands of passengers daily. A majority of the narrow gauge lines in Central India are very old and were constructed in the 19th-20th century, mainly to tackle the famine by supplying foodgrains, carry farm and forest produce and provide employment to locals, said a MRIDC official. At that time, over 1,000 kms of the narrow gauge lines criss-crossed the country''s landscape, but that has now come down to just the final 106 km, the official said. Later, they contributed to the national economy by way of carrying products from the different mines located in the region to far away manufacturing or marketing centres. According to the Indian Railways, in 2017, a little over 2,000 km of narrow gauge railway lines were still operational in the country, providing rail connectivity to some of the remotest regions, but accounting for barely 2 percent of the railway network. These include four world famous heritage operational lines which are also known as hill/mountain railways, located in Maharashtra, Tamil Nadu, West Bengal and Haryana-Himachal Pradesh. The Matheran Hill Railway runs between Neral-Matheran (in Raigad, adjacent to Mumbai, Asia''s only "automobile-free" hill station), the Nilgiri Mountain Railway links Coonnoor and Ooty, the Darjeeling Himalayan Railway connects Jalpaiguri to Darjeeling, and the Kalka-Shimla Railway joins the two towns in Haryana and Himachal Pradesh. While Matheran Hill Railway figures on the UNESCO''s tentative world heritage list, the other three have been designated as "UNESCO World Heritage Sites" over the past few years.
Jan 19 2019 (09:48) नागभीड - नागपूर रेल्वे मार्ग अधांतरीच आहे (www.lokmat.com)
SECR/South East Central
0 Followers
31264 views
Useful: 1
News Entry# 374298  Blog Entry# 4201240      Past Edits
Jan 19 2019 (09:48)
Station Tag: Itwari NG/ITRN added by 🚂🚃🚃आपको हुई असुविधा के लिए हमें खेद है🚋🚋/886143

Feb 06 2018 (00:54)
Station Tag: Itwari Junction/ITR added by Electrification of BAY~/36147
Stations:  Itwari Junction (Nagpur)/ITR   Chhindwara Junction/CWA   Itwari NG/ITRN
Posted by: Vishwanath_BAY^~ 3184 news posts
South East Central Railways successfully completes Construction of Rail under Rail on Kalumna-Itwari Main line for connecting Chhindwara-Itwari Gauge Conversion line at Itwari in just 44 Hours.
Page#    Showing 1 to 6 of 6 News Items
Scroll to Top
Scroll to Bottom
Go to Mobile site
Important Note: This website NEVER solicits for Money or Donations. Please beware of anyone requesting/demanding money on behalf of IRI. Thanks.
Disclaimer: This website has NO affiliation with the Government-run site of Indian Railways. This site does NOT claim 100% accuracy of fast-changing Rail Information. YOU are responsible for independently confirming the validity of information through other sources.
India Rail Info Privacy Policy